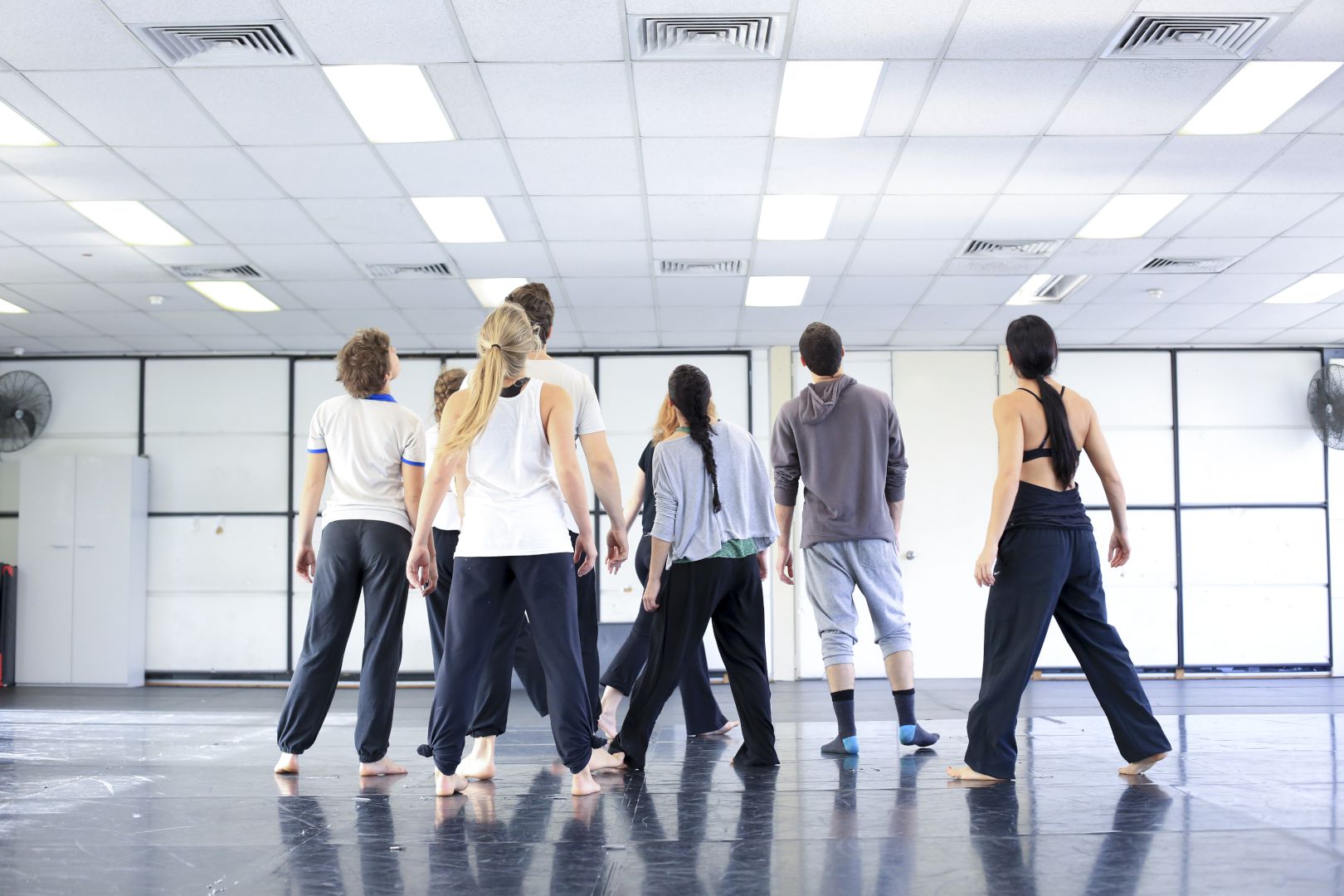 To transform people and communities through dance.

Our mission is to build dance communities and we do this for the people of Western Sydney. All the work we do engages deeply with those for whom it is meant. People are transformed by dance, and it is our job to facilitate these transformational experiences.

DMC emerged in 2012 when a group of ten driven independent dance makers in Sydney gathered to take charge by working together to create new work in an environment where local opportunities to do so were slim. Over a few pizzas and some wine, each of us pitched ideas for short works to each other, and conceived of a program called Big Dance in Small Chunks - ten artists, ten works, ten minutes each. This informal get-together was where DMC was born.

After that meeting, we met with our now long-time partner and friend FORM Dance Projects in Parramatta and asked them to present our work in their 2013 program, which they took on with great enthusiasm. We asked our now long-time friends Legs On The Wall, Bangarra and Sydney Dance Company if we could use their rehearsal spaces to develop the work, successfully undertook a TRIP Residency at Tasdance, ran a crowdfunding campaign and approached a small arts charity Ars Musica Australis for some financial support. We applied for funding to (then) Arts NSW and secured enough funding to start developing the work, which came as a welcome shock to us as a brand new collective of artists, many of us in our first year of practice. We applied in two successive rounds to the Australia Council, unsuccessful both times, but we pushed on anyway and presented the program of works by rehearsing part-time to develop it, and underpaying ourselves.

When Big Dance in Small Chunks premiered in 2013 at Riverside Theatres, it was triumphant. The season was the most highly attended dance show in FORM’s program that year and was awarded Most Significant Dance Event of 2013 in Dance Australia Magazine’s annual critics' awards. Jill Sykes wrote of the show in the Sydney Morning Herald at the time:

“The first showing by the Dance Makers Collective has imagination, thoughtfulness, individuality, performing ability and commitment. Even a sense of humour. It is a promising start by a group of independent artists in NSW, and worth catching in what will hopefully be a beginning rather than a one-off.”

And it was just the beginning.

Following the success of Big Dance in Small Chunks, DMC secured funding and mentorship support through the Australia Council’s (now defunct) JUMP Mentorship program. This enabled us to launch our second project WEBISODES, a series of short dance films created by each of the ten members, our first foray into dance on film which has been viewed by more than 10,000 people since being published online in 2014. In that same year, we supported three of the ten works presented in Big Dance in Small Chunks to be pushed further into longer works, curated in a Triple Bill again presented by FORM Dance Projects at Riverside Theatres, this time in 2015.

In these works, we started working more collaboratively together than we had before. Up until this point, we supported each other by working for one another as performers, providing feedback to each other, but essentially each of us were individual makers with ideas for works we wanted to make, to steer alone, but with some help from our peers. Our working methodology began to evolve from this relatively common way of making to a much richer, collaborative making process, which shifted even further in our next show.

DADS, which premiered in 2016, was a turning point for us and our most ambitious project to date. In DADS, DMC co-choreographed one full-length show, where each member shared equal responsibility for the show’s development. The show was also our first foray into community-engaged practice, where we took up residence at Dance Integrated Australia in the Northern Rivers region of NSW and worked with a local men's group the Dustyesky Russian Men’s Choir, interviewing them about their dance experiences and recording their rehearsal in the pub in Mullumbimby, which formed the soundtrack for our opening sequence. We collaborated with our fathers, asking them for their advice about the show, they built our set, gave us dance moves, curated the show’s music and provided interview content that threaded together the narrative arc of the work; oh, and they danced with us in the show too!

DADS was shortlisted for the Australian Dance Award for Outstanding Achievement in Independent Dance in 2017.

After the success of DADS, and proven successes before that with our other three projects, DMC decided to take the next step and transition to a more independent company. Until this point, we relied heavily on our partners because DMC was an unincorporated entity, a group of individual artists with a name to work under, but no formal legal structure. We were, and still are, committed to a democratic model of working where members share not only in the creative process in the studio and on stage, but in the strategic direction of the company. To maintain autonomy over this as a group of artists, DMC formed a partnership of its now 9 members; this enabled us to apply for our own funding and manage our own projects without relying on other incorporated bodies.

With this strategic funding DMC piloted new programs that launched in 2019, these were:

4. Dance On (dance classes for seniors)

At the same time, DMC seeded a range of new short works with our Making Spaces funding, which allowed us to work in community centres across Western Sydney by giving each member in DMC residency time of 4 weeks across an 18 month period from 2018-2019. Several of these seeded works have had presentation outcomes, these include:

1. Marnie and Melanie Palomares’ work The Space Between, a site-specific duet performed at the National Portrait Gallery in Canberra as part of the BOLD Festival and at Articulate Project Space in Leichhardt as part of de Quincey co’s PLATFORM 2019;

3. Rosslyn Wythes’ Converge/\Diverge, a series of collaborative projects with ceramicist Holly Macdonald which have been presented in Brussels;

Whilst piloting these programs, and developing and presenting these short works, DMC also developed The Rivoli, which was an even more ambitious community-engaged project than DADS which had a sold-out premiere season at Sydney Festival in January 2020. With funding from Create NSW, Cumberland Council, City of Parramatta, the Australia Council and Sydney Festival, this large-scale site-specific work brought together members of the local community, DMC’s new youth company Future Makers, a live swing band and 8 DMC performers at Granville Town Hall.

Given the breadth and scope of our program and projects, DMC became an incorporated association in 2019 and established a volunteer board consisting of members of the company and skilled professionals working outside DMC.

Once establishing ourselves as a company, DMC successfully secured for the first time Annual Program Funding through Create NSW. This funding enables us to continue our programs in 2020 as resident company at PYT Fairfield. The General Manager and Engagement Officer, DMC members Carl Sciberras and Melanie Palomares, work side-by-side with the remaining collective members to design and create opportunities for artists and the public to engage in rich dance experiences. This flat organisational structure enables us to lead together and adapt the program based on the emergence of ideas from within the company, and in response to opportunities that arise externally that align with our values, aims and objectives.

DMC is an exceptionally nimble creative enterprise that provides opportunities for artists in Sydney to create work together, and for a range of other demographic groups to engage in dance in various ways. We are a leader in our area of practice and exist as a beacon for others not only in dance, but in the arts more broadly, seeking to change the status-quo and embrace new ways of operating.

Thank you! Your submission has been received!
We have sent you an email to confirm your sign up. If you do not receive this email, please contact us.
Close
Oops! Something went wrong while submitting the form.
If this continues, please contact us or email us at contact@dancemakerscollective.com.au
X